9 things to do differently in the garden this year

What will you be doing differently in the garden next year? I’ve looked back over the pictures and interviews of last year to see what new tips, directions and ideas will be on my must-do list…

Black is a recessive colour, and is good for smaller gardens because it makes boundaries recede. That makes gardens feel a bit larger. And it’s a terrific background colour for plants, as you can see from this beautiful garrya elliptica over-hanging a neighbour’s fence. 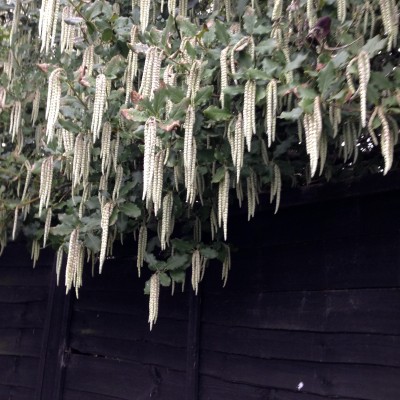 Black makes a striking background for plants – here is a neighbour’s garrya elliptica in January.

I picked this tip up from award-winning garden designer Charlotte Rowe. Many of her designs are for town gardens and when she suggests black as a fence colour, people worry that it may make the garden look too dark. But it doesn’t – it creates more of a sense of space than a pale fence would. It’s smart.

Conifers, evergreen shrubs, repeat flower hybrid teas…they’re all due for a revival. Having spent a lifetime in magazine journalism, I adhere to the theory that ‘what goes down must come up’ – a very stylish art editor colleague bought an Issey Miyake dress for my wedding in 1989, and has since brought it out every five years and worn it throughout the winter before putting it away for another four years . Garden fashions filter down more slowly than frocks, but the same principle applies. 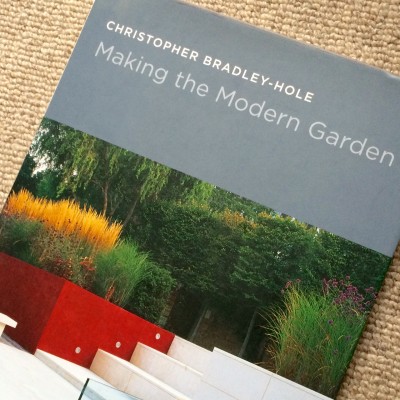 In 2007, Christopher Bradley-Hole was at the forefront of the ‘modern’ garden. What does he consider ‘modern’ in 2016?

I went to a Garden Museum talk by Christopher Bradley Hole a few months ago. He is a ‘modernist’ and is responsible for the creation of much of today’s modernist prairie look. Tim Richardson, interviewing him, asked what the next big direction in garden design will be. Bradley Hole replied: ‘I never used to be interested in shrubs and pruning, but I’ll be working with them more and more.’

Under the ‘what goes down must come up’ (WGDMCU) theory, roses should be getting more sculptural and reminiscent of the hybrid teas of the 1960s and 70s. 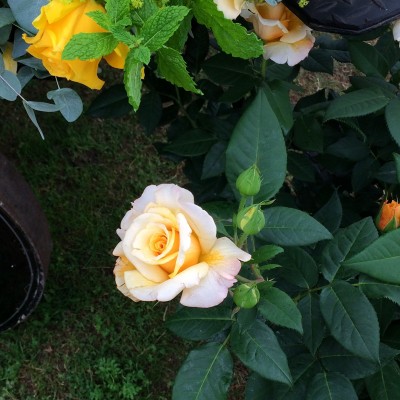 To prove my point, the RHS selected a yellow rose called ‘Sunny Sky’ as Rose of the Year 2016. It’s much less frothy and bosomy than the ‘old-fashioned’ roses that have dominated the scene in recent years (and it’s yellow, a colour which has been disapproved of in some gardening circles since Vita Sackville-West and Virginia Woolf. I rest my case…). I don’t suppose the RHS were specifically setting out to prove my point, of course. 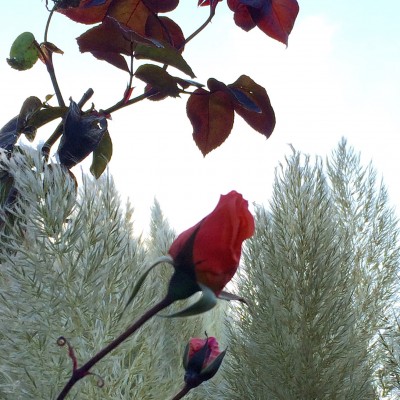 A hyrbid tea rose and pampas grass – both cliches of the 1970s town garden. But I think they are beautiful. The grasses compensate for the lack of foliage and awkward shape of the rose stems. Due for a revival if done in a contemporary way… 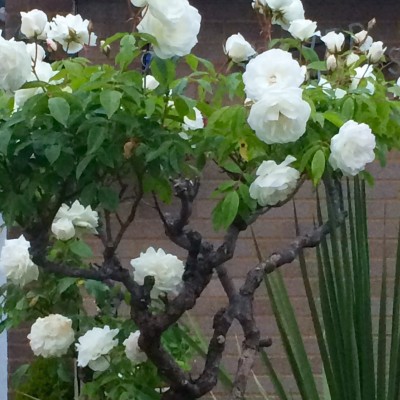 This rose was planted in a neighbour’s garden in the 1960s and it flowers all year round. 1960/70s roses often had twiggy outlines and poor foliage, but this sculptural pruning deals with the problem nicely and would work in any contemporary garden.

Fergus Garrett is working on creating a ‘conifer corner’ at Great Dixter. He uses the arrangement of pots at the front porch as a trial area to see what things will look like. Here there is a contrast of shapes and colour from the different conifers.

Pruning is the new black…

Christopher Bradley Hole says that he’s been inspired by the way the Japanese prune their trees and shrubs. Japan’s small town gardens often have one perfectly pruned tree as their focus. Posy Gentles learned about French ‘transparent’ pruning a few years ago and has done it on our cotinus coggyria ‘Grace’. This was a shapeless shrub that grew into a tree, and its magnificent leaf colour make it a dominant (and much loved) feature of the garden. She pruned and shaped it for me early in 2015. It received double the compliments afterwards and is so much more beautiful. 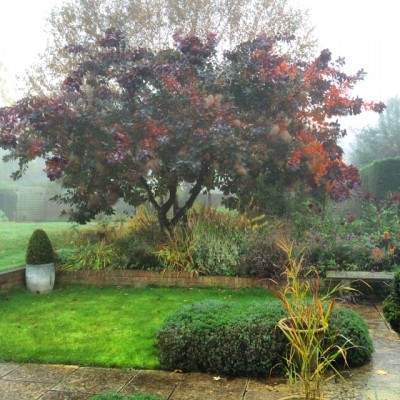 Now shaped by Posy Gentles, our cotinus coggyria ‘Grace’ is the most striking feature in the garden. Seen here in November. 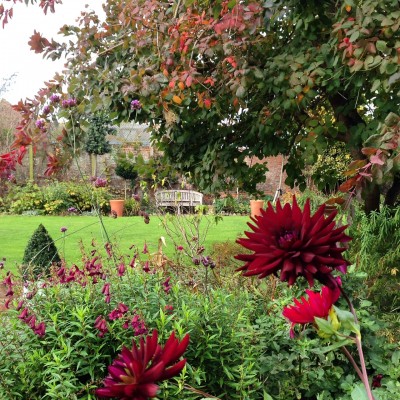 The cotinus before pruning, in 2014 – still stunning leaf colour, but less elegance. 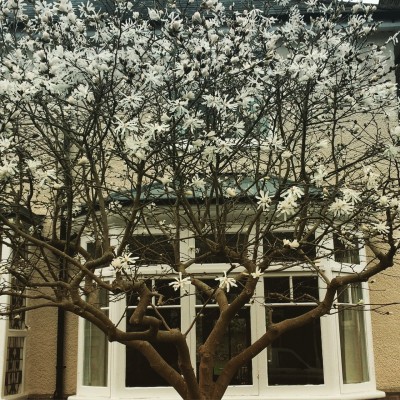 Posy also pruned Sarah Langton-Lockton’s magnolia. It was a sprawling and neglected tree, but it now has an almost Japanese elegance…

Good sculpture is expensive – the garden below belongs to a friend of mine who’s very knowledgeable about art and has been involved in the art world for a long time. She’s been able to spot emerging artists.

This photograph, taken in February, shows how sculpture defines a winter garden beautifully. But there are an increasing number of people designing for the garden interface between art and craft, so you can find less expensive ways of creating winter interest. 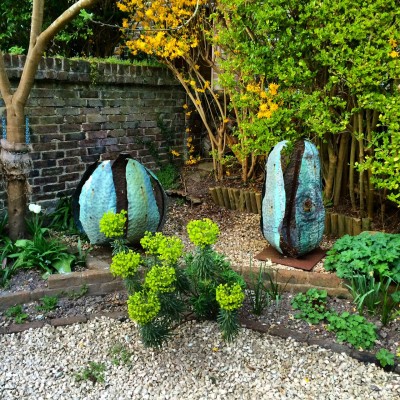 Sculpture keeps a garden structured when there is not much out yet. As do garden ornaments. 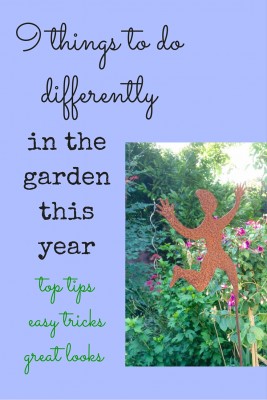 Grow difficult-to-buy veg in your garden this year

This is like a race – no sooner than you start growing multi-coloured carrots than they appear on the shelves at the local farm shop. James Wong is the leader of this particular movement, and I heard him talk about growing exotic fruits and veg (rather than plain old onions and parsnips) at the end of 2014. I was inspired by what he said, but didn’t quite get around to planting my own quinoa. However, I was sent a wasabi plant by The UK Wasabi Company. Real wasabi is expensive – what you get in most sushi is probably a mixture of mustard and horse-radish – but wasabi does love cool, damp summers and thrives in shade. It even likes over-hanging branches. There is a shady spot in the veg patch where nothing much grows. I have planted the wasabi below in that patch and it is now a metre or so across. I’ll have to wait till next year before I harvest my own home-grown wasabi, but the UK Wasabi Company also sell it fresh. Specialist chilli varieties are also difficult to buy (supermarkets tend to sell mixed packs which are very variable), so I’m going to carry on growing chillies, and intend to be much more careful about labelling them…. 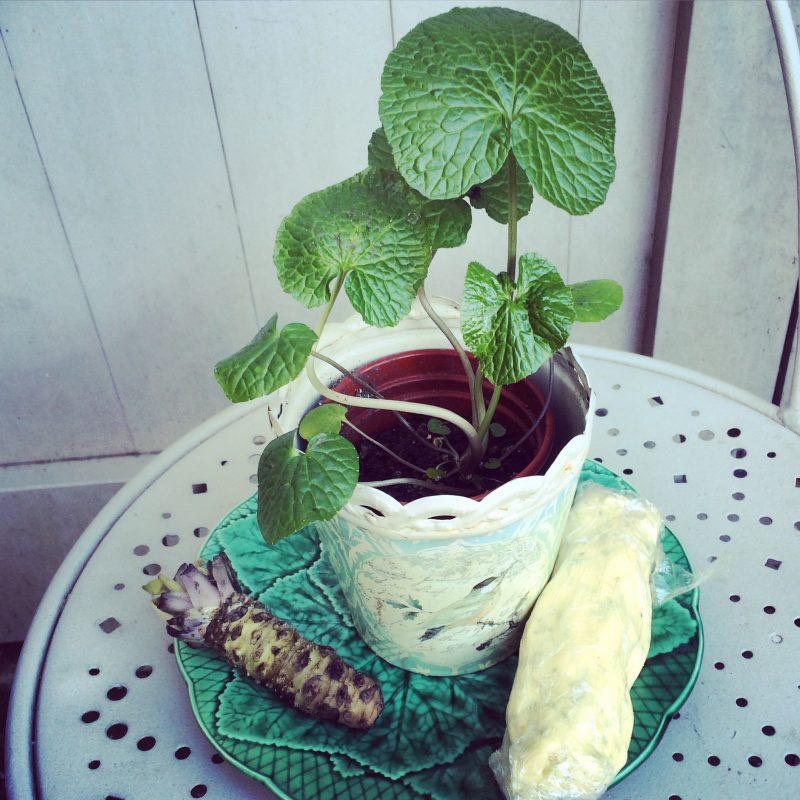 Every year, try something new in the veg plot. This is wasabi (used in Japanese food like horse-radish) sent to me by the UK Wasabi company. It grows in shade – so makes a very useful addition for areas where not much else will flourish. It’s now nearly a metre in size, and is so far trouble-free, barring a few nibbles from snails.

Be inspired by garden ‘street style’…

I love going to the shows, but sometimes even quite an ordinary street can offer up flashes of inspiration. Here are three which I particularly loved over the last 12 months: 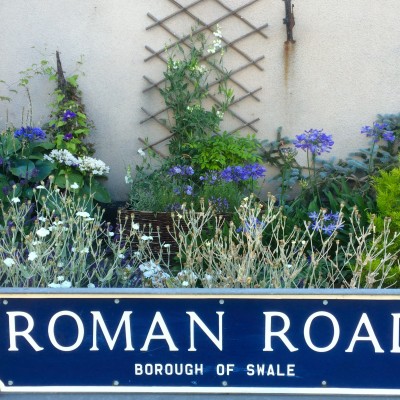 Did the owner of this front garden design the colour scheme to match the street sign? Love it.

Planting at Edgware Road tube station. I love the pink and red flowers with the pale pink planter. I would never have expected to be inspired by planting at a London tube station! 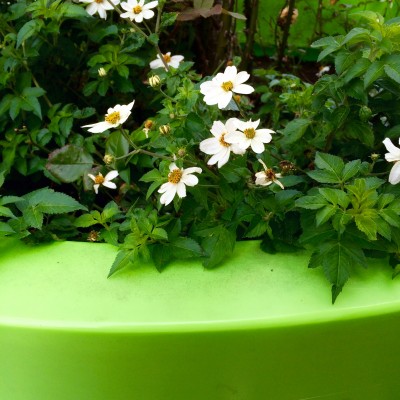 French street plantings are often very inspiring. This was in a Calais street, and I think the use of a bright green container with a dark green and white planting is really successful.

And not in any particular category…

While looking back on last year, I must do a shout-out for The Garden Clothing Company. On press day at the Hampton Court Flower Show, they asked garden journalists to pick an item of their clothing for free (the only condition was that they be photographed in it.) I was with Fern Alder and Sarah Langton-Lockton. We each found the perfect thing in minutes. Once on, it looked as if we’d owned it forever. It’s a small range and we all have very different styles, so this, in itself, is quite an achievement. Over the summer, my choice of a bias-cut top with a hankerchief hem turned into my favourite thing to wear. And people literally stopped me in the street (and, once, on a train) to say how great it looked. 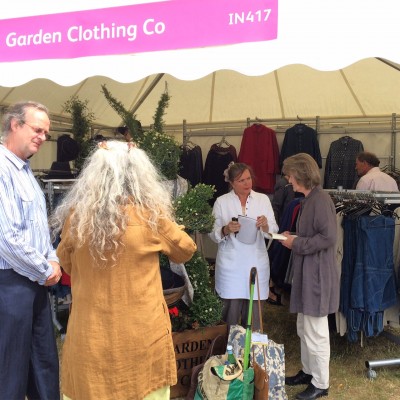 Fern and Sarah in their Garden Clothing company tops at Hampton Court show in June.

Happy New Year – and let me know what you’ll be doing differently in the garden this year, either in the comments below or on the Middlesized Garden Facebook page. In 2016, the Middlesized Garden will be covering ‘How to Choose a Shed’, new advances in garden lighting and interviews with experts to help make it your (and my) best-ever garden year… do share using the buttons below – thank you! 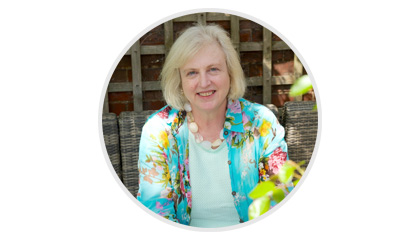 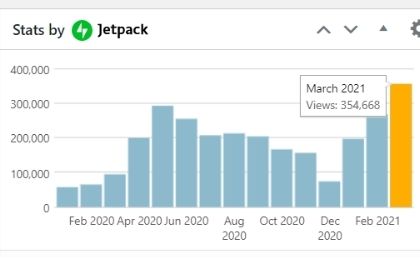 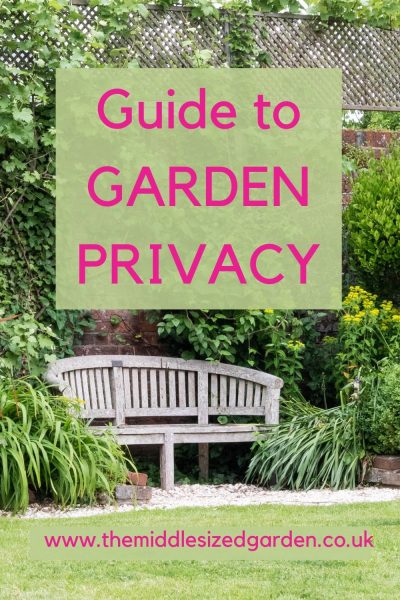 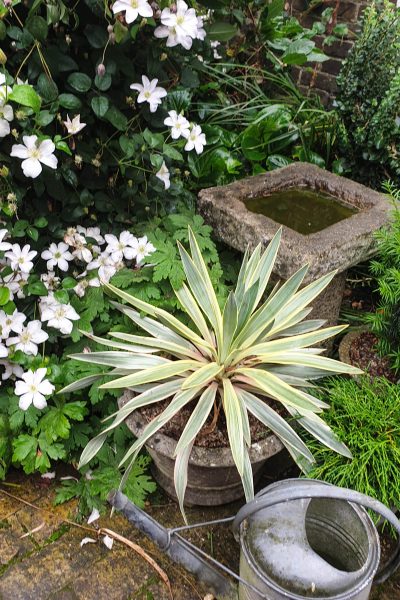 For the next six months, the evergreen pots in my garden will create almost all the structure and impact. But they need very little care and put up with a… 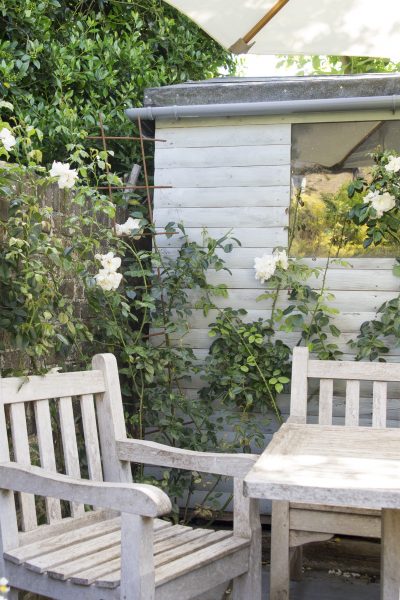 I have been debating the crucial issue of what colour to paint my shed. Painting your shed transforms your garden. And if I paint my shed, it’ll also last longer…. 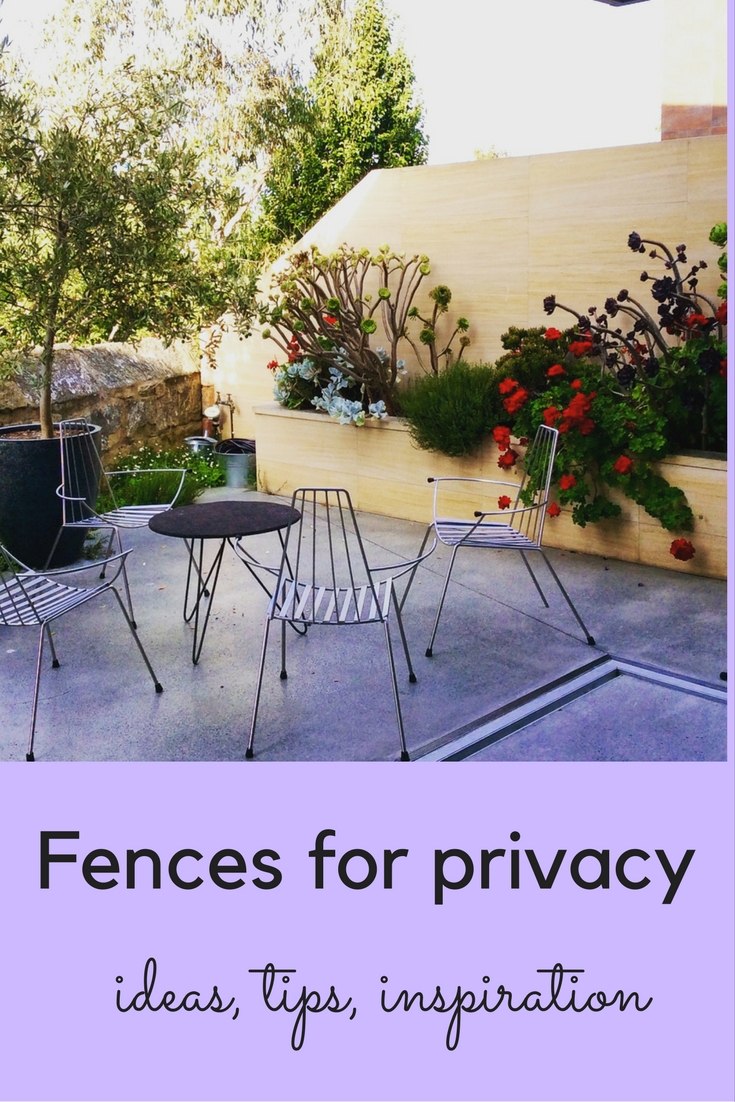 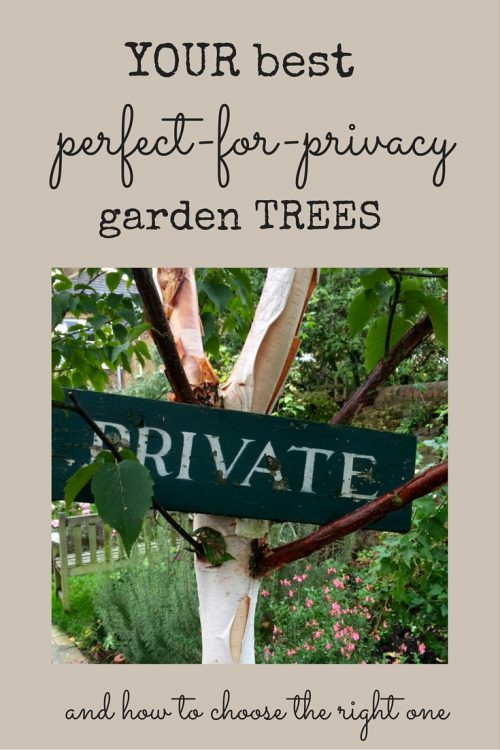 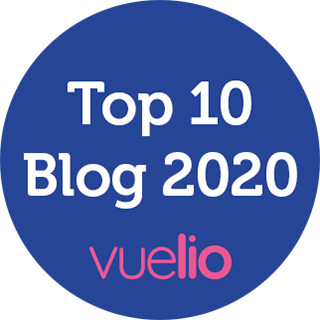 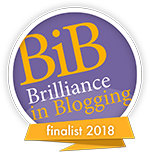